Chennai is the capital of the Indian state of Tamil Nadu. Located on the Coromandel Coast of the Bay of Bengal, it is one of the largest cultural, economic and educational centres of south India. According to the 2011 Indian census, it is the sixth-most populous city and fourth-most populous urban agglomeration in India. The city together with the adjoining regions constitutes the Chennai Metropolitan Area, which is the 36th-largest urban area by population in the world. The traditional and de facto gateway of South India, Chennai is among the most-visited Indian cities by foreign tourists. It was ranked the 43rd-most visited city in the world for the year 2015. The Quality of Living Survey rated Chennai as the safest city in India. Chennai attracts 45 percent of health tourists visiting India, and 30 to 40 percent of domestic health tourists.

Places of Interest in Chennai 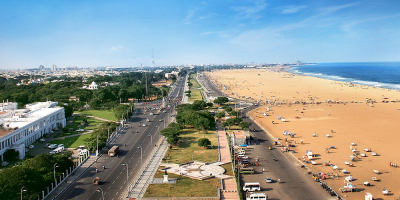 Marina Beach is a natural urban beach in Chennai, Tamil Nadu, India, along the Bay of Bengal. The beach runs from near Fort St. George in the north to Foreshore Estate in the south, a distance of 6.0 km (3.7 mi), making it the longest natural urban beach in the country. The Marina is primarily sandy, unlike the short, rocky formations that make up the Juhu Beach in Mumbai. The average width of the beach is 300 m (980 ft) and the width at the widest stretch is 437 m (1,434 ft). Bathing and swimming at the Marina Beach are legally prohibited because of the dangers, as the undercurrent is very turbulent. It is one of the most crowded beaches in the country and attracts about 30,000 visitors a day during weekdays and 50,000 visitors a day during the weekends and on holidays. During summer months, about 15,000 to 20,000 people visit the beach daily. 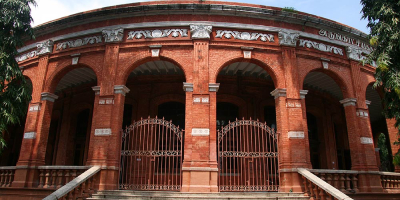 The Government Museum or Madras Museum is a museum of human history and culture located in the Government Museum Complex in the neighbourhood of Egmore in Chennai, India. Started in 1851, it is the second oldest museum in India after the Indian Museum in Kolkata and is the tenth oldest Museum in the World. It is particularly rich in archaeological and numismatic collections. It has the largest collection of Roman antiquities outside Europe. Among them, the colossal Museum Theatre is one of the most impressive. The National Art Gallery is also present in the museum premises. Built in Indo-Saracenic style, it houses rare European and Asian painting of renowned artists, including that of Raja Ravi Varma. It is the third largest museum in the world, and with 0.6 million visitors in 2018. It has the richest collections of bronze idols, 500 of them dating to 1000 BC, in Asia. 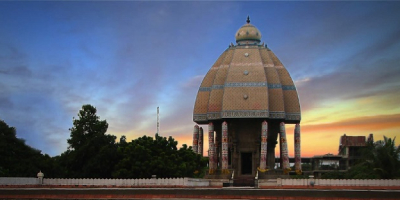 Valluvar Kottam is a monument in Chennai, dedicated to the classical Tamil poet philosopher Valluvar. It is the city’s biggest Tamil cultural centre. Valluvar Kottam is located at the intersection of the Kodambakkam High road and the Village road in Nungambakkam neighbourhood of Chennai. The monument now stands at what was once the deepest point of a local lake called the Nungambakkam lake. The construction of the Valluvar Kottam was conceived and executed by the then Chief Minister of Tamil Nadu M. Karunanidhi during the 1970s. It was designed by South Indian traditional architect V. Ganapati Sthapati, who is also the architect of the Thiruvalluvar Statue at Kanyakumari. It was inaugurated in April 1976 by the then President of India Fakhruddin Ali Ahmed. 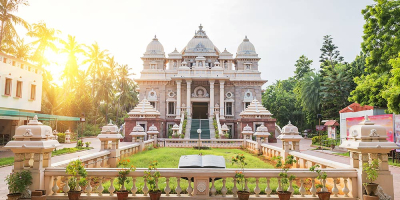 Mylapore is a neighborhood in the central part of the city of Chennai, India. It is one of the oldest residential parts of the city. It is also called Thirumayilai. The locality is claimed to be the birthplace of the celebrated Tamil philosopher Valluvar. Mylapore is known for its tree-lined avenues, Kapaleeshwarar Temple, Katcheri seasons and Ramakrishna Math among many others. San Thome Basilica which houses the tomb of Thomas the Apostle is in Mylapore. 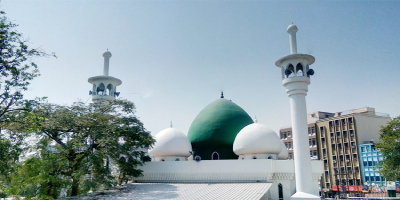 The Thousand Lights Mosque of Royapettah, Chennai is among the most esteemed mosques of the city as well as the state of Tamil Nadu. Built in the early 19th century by the Wallajah family of the Carnatic rulers, it is till date a popular gathering place for the daily prayers and festive occasions like Muharram. The site gets its name from the legend that to illuminate the entire prayer hall, right about a thousand oil lamps used to be lit back in the days. One can only imagine how beautiful that outline must have looked against the dark black sky.

Chennai is one of the main center for pearl jewelry in India and is famous world over.Skilled craftsmen, do processing and grading of pearls here. After the long process of grading and processing of pearls is over they are strung together by skilled knitters or patwas, using silk or gold strings. Different types of pearl necklaces are made in Chennai. Typical designs being Satlada (seven strands of pearls set with emeralds, diamonds and rubies, Kundan Ranihar (pearl sets with enamel kundan work), and the regular Jugni sets (several strands of pearls with a central pendant) and many more.Jewellery is made out of almost every material known and has been made to adorn nearly every body part, from hairpins to toe rings and many more types of jewellery.

Chennai, formerly known as Madras, is the capital city of the Indian state of Tamil Nadu. Located on the Coromandel Coast off the Bay of Bengal, it is a major commercial, cultural, and educational centre in South India, while the port of Chennai is the second largest port in India. Chennai is dotted with hotels. Most of the hotels in Chennai are strategically located close to the business centers and the transportation hubs. The airport hotels in Chennai-Madras are advantageously situated close to the city airport. For the tourists who seek class there are several deluxe hotels in Chennai.

Chennai city growing migrant population is all setting a high demand for real estate. It's not only the techies who have generated this new wave but also the migrant population coming in search of entrepreneurial opportunities. The depression is agricultural sector is forcing people to find other means for survival. This is the reason for increase in migration.