Kolkata, also rendered Calcutta is the capital of the Indian state of West Bengal. Located on the eastern bank of the Hooghly River, the city is approximately 80 kilometres (50 mi) west of the border with Bangladesh. It is the prime business, commercial, and financial hub of eastern India and the main port of communication for the North-East Indian states, as well as having the third-largest urban economy of India. According to the 2011 Indian census, Kolkata is the seventh-most populous city in India, with a population of 4.5 million residents within the city limits, and a population of over 14.1 million residents in the Kolkata Metropolitan Area, making it the third-most populous metropolitan area in India.

Places of Interest in Kolkata 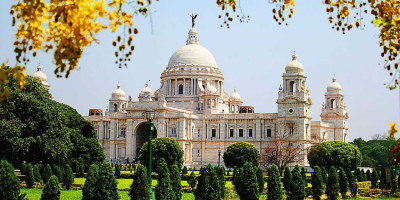 Another relic of the British Raj in India, the Victoria Memorial is located in the heart of Kolkata, in West Bengal. This white marbled opulent structure was built in memory of Queen Victoria to celebrate her 25 years of rule over India and is almost a replica of the Victoria Memorial in London. Victoria Memorial is an iconic structure that is synonymous with the city of joy! The memorial is surrounded by a lush green and well-maintained garden, which spreads over 64 acres and has numerous statues and sculptures in it. A sixteen-foot tall bronze statue of victory, mounted on ball bearings at the top of the memorial, serves to heighten the overall appeal and grandeur of the entire complex. 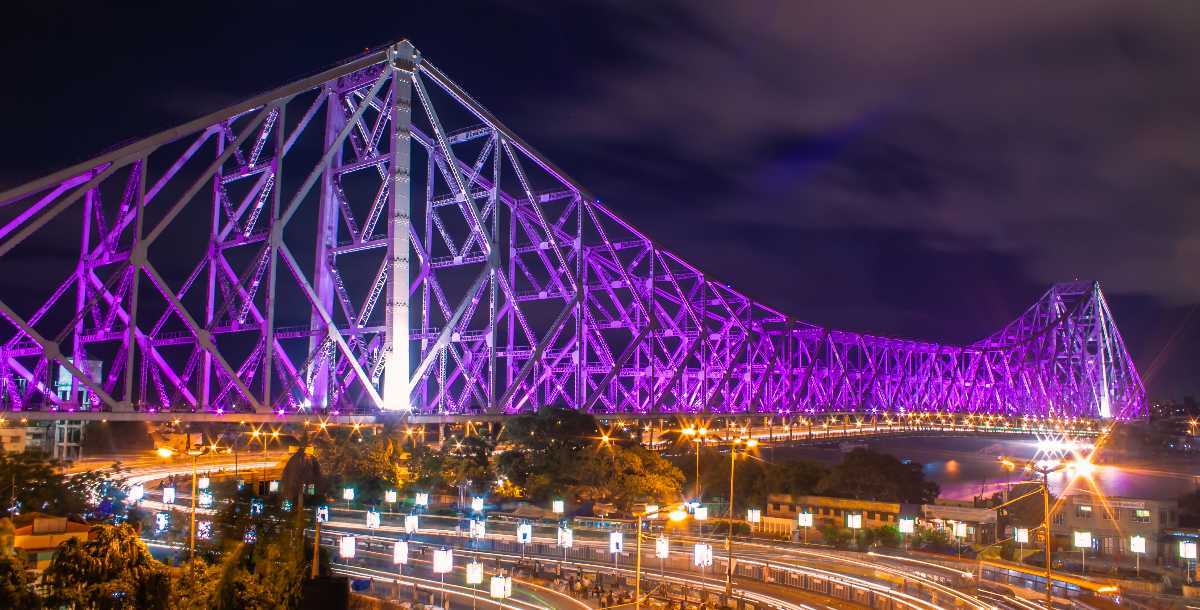 An iconic landmark of Kolkata, Howrah Bridge is a massive steel bridge constructed over the Hooghly River. It is considered to be among the longest cantilever bridges in the world. Also known as Rabindra Setu, it connects Howrah and Kolkata. It carries daily traffic of over 100,000 vehicles and countless pedestrians and is as historic as it is grand. The opulence of the bridge, however, comes alive in the night time as it is all lit up. You can also take a ferry ride as it runs between Kolkata and Howrah, from the launch ghat. The view of the city from the ferry, especially in the night, is priceless, to say the least. Howrah Bridge was the third-longest cantilever bridge at the time of its construction, but now it is the sixth-longest one of its types. It was renamed as Rabindra Setu on June 14, 1965, after the name of Nobel Laureate Rabindranath Tagore. 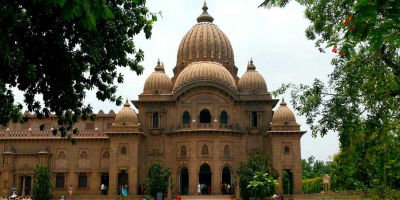 Belur Math in Kolkata is the headquarters of the Ramakrishna Math and Mission. Sprawling over forty acres of land on the west bank of the Hooghly River, it is visited by people from all over the world, irrespective of their religious beliefs. The temple is known for its distinctive architecture, which fuses Hindu, Christian and Islamic motifs as a symbol of unity of all religions. Founded by Swami Vivekananda, the chief disciple of Ramakrishna Paramahansa, the temple is at the heart of the Ramakrishna Movement. 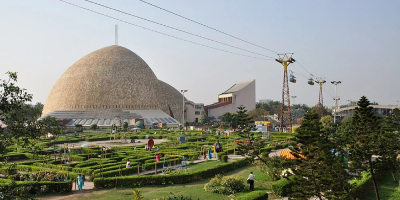 One of its kind in India, the Science city was inaugurated on 1st July 1997. It is a major attraction for the residents of Kolkata as well as for the people visiting Kolkata. It is one of the finest and the largest science museums in the world and provides a fun way of learning science. Under the National Council of Science Museums, the Science City in Kolkata is the largest science centre in the entire Indian Subcontinent. It is a governmental organisation under the Ministry of Culture and the main motto of the Science City was the popularisation of science. It is located at the crossing of the EM Bypass and the JBS Halder Avenue in Kolkata. The science city is a perfect blend of education with fun. There is a special section dedicated to the aquatic world wherein you can learn every minute detail about the various fishes and insects in the aquatic world. 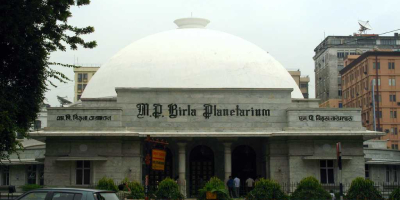 Situated at the famous Chowringhee Road right in the proximity of Victoria Memorial and St. Paul's Cathedral Birla planetarium is the largest planetarium in Asia and the second largest in the world! Situated in the city of joy - Kolkata, Birla Planetarium is a magnificent edifice set up by Pandit Jawaharlal Nehru on 2nd July 1963. It is one of the three planetariums present in India. Also known as Taramandal, the Birla Planetarium regularly holds many shows and programs are in various languages including Hindi, English, Bengali, and other regional languages. In addition to being a planetarium, Birla Planetarium also has an electronics laboratory and an astronomy gallery that has a collection of paintings and astronomical models. 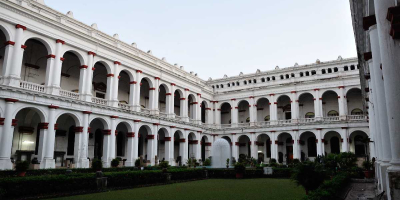 The ninth oldest museum of the world and largest in India, the Indian Museum is located in the city of joy - Kolkata. The foundation stone of the Indian Museum was laid down in the year 1814 and has been a centre of multidisciplinary activities ever since. Popularly known as 'Jadughar', it has the finest collection of contemporary paintings, sacred relics of Buddha, Egyptian mummies and ancient sculptures. In addition to these, the Indian Museum boasts of some of the most exquisite collections of ornaments, fossils, skeletons, antiques, armours, and stunning Mughal paintings.

Kolkata Jewelers offer you quality jewelry at affordable prices. Our online store gets you silver jewelry, gold jewelry and diamond jewelry and much more.We offer beautiful diamond rings, diamond pendants, necklaces, earrings and much more. Although real diamonds come at a high price, we can get you affordable diamond jewelry.We, at Kolkata Jewelers also deal in costume jewelry, which is a fashion statement these days.

Kolkata, the erstwhile capital of British India is saturated with the air of colonial hangover. The city is full of colonial mansions that the Brits erected all over the city in resemblance of their own capital city back home- London. The colonial mansions are therefore not the only colonial influences in the city.

Several of the internationally renowned software and software related companies have set up their unit in Kolkata. Likes of Infosys, IBM, Wipro, TCS, etc has opened up their centers in Kolkata.

Real Estate Kolkata developing with tremendous growth. Construction and infrastructural growth is on the rise in Kolkata. Being the capital city of West Bengal, it has got superb opportunities in the future. It is one of the largest cities in India with a population crossing well over several millions. The need for the developmental activities is enormous. Keeping in mind the future prospects Kolkata is riding on the surf of growth. The development in the industrial sector was huge in the past few years which added to the growth of the real estate sector.